Professor Peter Rothwell presented Professor Paola Patrignani, Professor of Pharmacology from the University of Chieti, Italy, with the Senior Science Award and described how she is a leader in the field of arachidonic acid metabolism and the pharmacology of antiplatelet and anti-inflammatory drugs. Professor Patrignani’s work has made a major contribution to the understanding of the biosynthesis, biochemistry and molecular biology of the COX-pathway and downstream enzymes.

The intricacies of aspirin’s pharmacological activity within the body were presented by Professor Paola Patrignani in her award acceptance presentation and this in many ways helped to inform some of the results from the presentations that followed in the clinical trials update session. A clear theme of ‘one size does not fit all’ resonated throughout the meeting and the insight gained from Paola’s award-winning work helps to explain this.

Professor Patrignani’s work includes the development of a direct biomarker of aspirin activity making it possible to study what is happening within the individual and may potentially lead to a better understanding of how best to dose aspirin for different populations of patients. Her work demonstrates the feasibility of quantifying the extent and duration of platelet COX-1 acetylation and shows how this can enable the characterisation of the genetic, pharmacokinetic and pharmacodynamic determinants of interindividual variability in the antiplatelet response to low dose aspirin and has helped to identify extra-platelet sites of aspirin drug activity.

In addition, Professor Patrignani showed how her work has helped to translate the clinical findings of aspirin’s cancer prevention benefits into a mechanistic hypothesis of aspirin’s anti-cancer effects: aspirin is thought to affect early events in intestinal tumorigenesis. Paola proposed that crosstalk between platelets and stromal cells in the intestine appear to promote a chronic inflammatory response which may then lead onto colorectal cancer (CRC) development. Low-dose aspirin selectively inhibits platelet function and it is in this way that it may constrain the pro-inflammatory role of platelets in cancer development.

In the case of cancer metastatic spread, it is thought that platelet and cancer cell interactions increase the metastatic potential of a tumour by increasing the tumour’s ability to migrate and survive. Professor Patrignani explored the role of tumour educated platelets (TEPs) in which a platelet phenotype change occurs making them more able to facilitate the spread of metastases around the body. By inhibiting platelets, aspirin reduces the metastatic potential of cancer cells.

The crucial roles of platelets in cancer 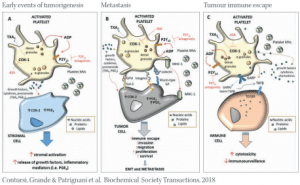 In addition to the inhibition of early events in tumorigenesis and the potential reduction in metastatic spread, aspirin can also help stop tumour immune escape and may be useful in combination with cancer immune therapies. Professor Patrignani showed how her work has helped to explain all these mechanisms in terms of pharmacological activity.

In the future Professor Patrignani hopes to use the novel direct biomarker of aspirin action to help understand the extent of acetylation of COX-1 and COX-2 in the CRC lesions of patients taking low and medium doses of aspirin. Work that may in turn lead to a better understanding of the ideal dosing strategy to use.

During the discussion the role of factors such as obesity were explored. It is understood that obesity increases platelet activity and this is one mechanism by which obesity increases the risk of developing CRC. 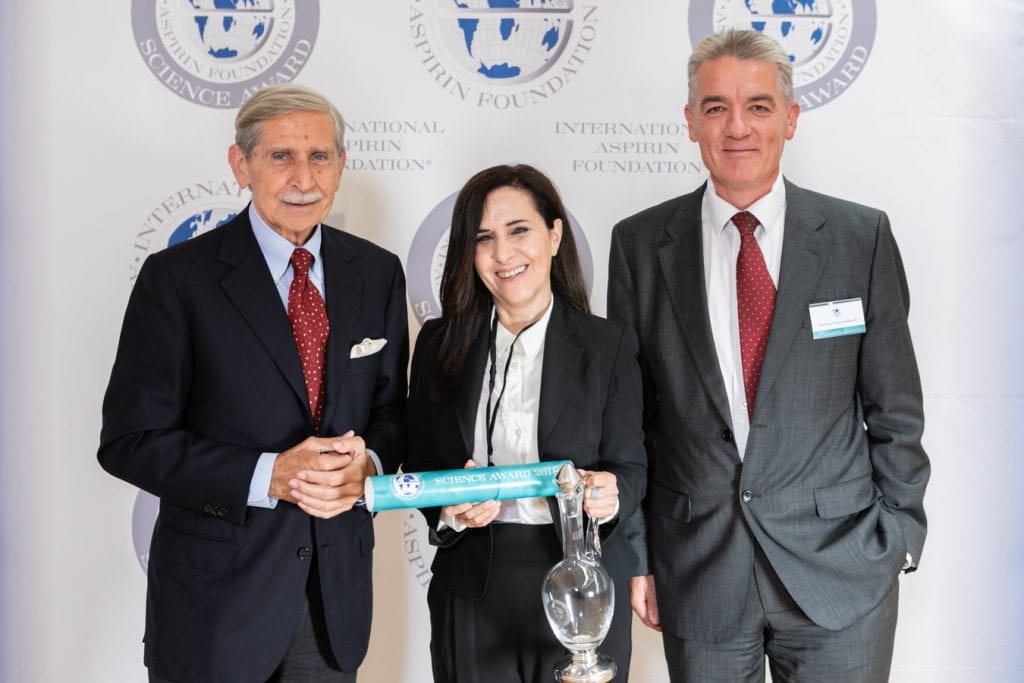