Summary of USA guidelines for aspirin

The purpose of this document is to keep a working list of USA guidelines with information on aspirin.  The guidelines themselves should be read for further information.

The U.S. Preventative Services Task Force (USPSTF) was created in 1984 and is an independent, volunteer panel of national experts in preventative and evidence-based medicine.  They use the following to grade their recommendations: 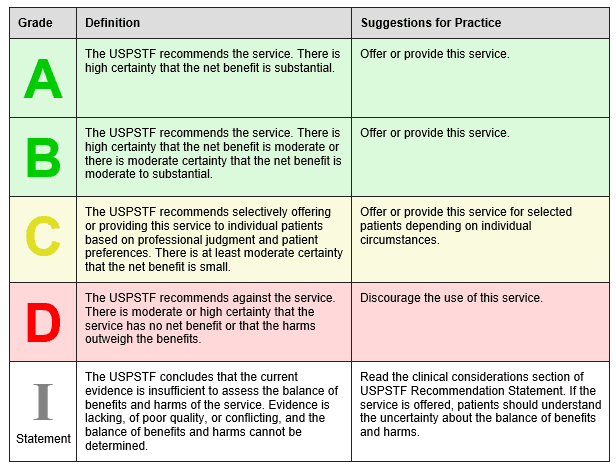 Grade B Adults age 50 to 59 years with a 10 year CVD risk of greater than 10% who are not at increased risk for bleeding, have a life expectancy of at least 10 years and are willing to take low-dose aspirin for at least 10 years.

Grade C Adults age 60 to 69 years with a 10 year CVD risk of greater than 10% should consider their individual risks versus benefits of long term low dose aspirin. Those who are not at risk of bleeding, have a life expectancy of at least 10 years and are willing to take low-dose aspirin for at least 10 years are more likely to benefit.

The USPSTF state that there is insufficient current evidence to assess the balance of benefits versus harms of initiating aspirin for primary prevention of CVD and CRC in adults younger than 50 years or 70 years or older. (Grade I).

The USPSTF is currently commissioning an update to its guidance on aspirin and primary prevention. More information can be found at:

“ Aspirin is well established for secondary prevention of  [atherosclerotic cardiovascular disease] ASCVD and is widely recommended for this indication, but recent studies have shown that in the modern era, aspirin should not be used in the routine prevention of ASCVD due to lack of net benefit.”

In particular they state that aspirin should be avoided in the following groups:

AHA makes the following recommendations based on a meta-analysis of 3 recent trials:

‘Aspirin therapy (75-162mg/day) may be considered as a primary prevention strategy in those with diabetes who are at increased cardiovascular risk, after a comprehensive discussion with the patient on the benefits versus the comparable increased risk of bleeding.’

The ADA review clinical trial work including the Antithrombotic trialists’ collaboration, ASCEND, ARRIVE and ASPREE and conclude that aspirin appears to have a modest impact on decreasing ischemic vascular events especially where atherosclerotic cardio vascular disease (ASCVD) risk is higher. This however is tempered by its main side effect of increased gastrointestinal (GI) bleeding which may be as high as 5 per 1,000 per year in the real-world setting. Where ASCVD risk is more than 1% per year the number of ASCVD events that are averted are comparable to the number of GI bleeding events caused. The ADA however recognise that CVD events and GI bleeding events ‘do not have equal effects on long-term health’.

The ADA explain that men and women age 50 years or older with diabetes and one additional CVD risk factor such as family history of ASCVD, high blood pressure, high cholesterol, smoking, chronic kidney disease and who are not at increase bleeding risk e.g. older age, anaemia, renal disease, are most likely to benefit from using low-dose aspirin for the primary prevention of ASCVD. They also suggest that non-invasive imagining techniques could potentially help identify people for aspirin primary prevention therapy.

Launched in 2012, Million HeartsR  (https://millionhearts.hhs.gov/about-million-hearts/index.html) is a national initiative in the USA set up in 2012 to prevent 1 million heart attacks and strokes by 2017, it now continues its work improve CVD health over the next 5 years. It is co-lead by The Centers for Disease Control and Prevention and the Centers for Medicare and Medicaid Services Services on behalf of the U.S. Department of Health and Human Services.

Over the next 5 years until 2022 Million HeartsR  plans to build on its experience, expertise and partnerships and seeks commitment to preventing a million CVD events in five years by:

And increase the use of cardiac rehabilitation and healthy living behaviours

The USPSTF recommends low-dose aspirin for the prevention of colorectal cancer in certain groups (see primary prevention of CVD above).

The possible harms of aspirin use (100mg or less) daily or every other day include an increased risk of stroke and bleeding in the stomach and intestines. These risks may be greater among the elderly, men, and those with conditions linked to higher than normal risk of bleeding.”

See Health professional versions for an in-depth analysis of the trial data.

“Aspirin is well established for secondary prevention of [atherosclerotic cardiovascular disease] ASCVD and is widely recommended for this indication.”

The ACC/AHA in their 2014 Non ST-Elevation acute coronary syndromes guidelines recommend aspirin as soon as possible before percutaneous intervention (PCI) and then “after PCI, aspirin should be continued indefinitely at a dose of 81 mg to 325 mg daily.”

“Administration of aspirin is recommended in patients with AIS [acute ischemic stroke] within 24-48 hours after onset. For those treated with IV alteplase, aspirin administration is generally delayed until 24 hours later but might be considered in the presence of concomitant conditions for which such treatment given in the absence of IV altephase is known to provide substantial benefit or withholding such treatment is known to cause substantial risk.”

The American Diabetes Association (ADA) (Cardiovascular disease and risk management: Standards of Medical Care in Diabetes-2020. Diabetes Care 2020; 43(suppl.1): S111-S134) recommends low-dose aspirin (75-162 mg/day) for secondary prevention in people with a history of cardiovascular disease (CVD). For those unable to take aspirin clopidogrel (75mg/day) can be used. Dual antiplatelet therapy with low-dose aspirin and a P2Y12 inhibitor is recommended for at least a year after acute coronary syndrome therapy (ACS).

The International Federation of Gynecology and Obstetrics recommend that women identified as high risk of pre-eclampsia during first trimester screening should be given aspirin prophylaxis (150mg at night from 11-14 weeks gestation until delivery or the diagnosis of pre-eclampsia). They do not advocate a policy of low-dose aspirin for all pregnant women.

The U.S. Preventative services Task Force (USPSTF) recommends (Grade B) low-dose aspirin (81 mg per day) after 12 weeks gestation as a preventative medication in women at high risk of pre-eclampsia6.

USPSTF Low-dose aspirin use for the prevention of morbidity and mortality from preeclampsia: preventative medication. 2014 (currently being updated) available @ https://www.uspreventativeservicestaskforce.org/uspstf/recommendations/low-dose-aspirin-use-for-the-prevention-of-morbidity-and-mortlality-from-preeclampsia-preventative-medication 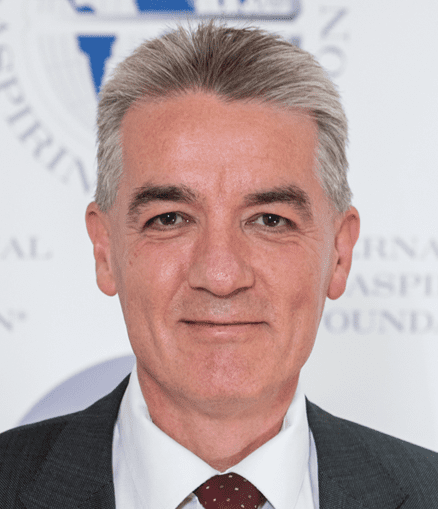